Driving is a Privilege, Not a Right!

Eighteen driving convictions from 1991 to 2016 including speeding, careless driving, following too closely, driving too fast for conditions, failing to yield right-of-way, driving vehicle while ability impaired by alcohol/drugs, operating an uninsured motor vehicle on a public roadway as well as numerous convictions for driving an unsafe/defective vehicle or operating a vehicle with defective/missing headlamps (probably cited for a more serious violation and then a plea deal was reached).

Yet, this driver was still behind the wheel of a vehicle when he crashed into our client Drew Chambers on October 3, 2017. The officer issued him a citation for careless driving resulting in injury to which he pleaded guilty on January 30, 2018.

It was early afternoon when Drew was returning home from a ride. He was riding eastbound in the bike lane at 26th Avenue in Lakewood, CO, when the driver of a Subaru Outback heading westbound collided with Drew while turning left.

The front of the Subaru hit the rear wheel of Drew’s bike causing him to be thrown 10-15 feet into the street and bike lane. His head hit the pavement first. Drew rolled onto his back and remained stationary, as he was worried about a neck or back injury.

The driver claimed that he did not see any oncoming traffic, but Drew was clearly visible as he was wearing a bright blue kit with green trim. He had the right of way and was not speeding. As Drew was approaching the driver head on, he could see the driver clearly not looking at him when he decided to turn.  Drew yelled, swerved, and tried to slow down but knew a crash was going to happen, and he was terrified. The entire collision was caught on a dashboard camera by a car that was stopped on Teller Street.

Drew had a number of cuts on his face and legs as well as a sore wrist. Following the crash, his wife drove him to the ER where doctors treated his cuts and took x-rays of his left hand.  The following week, Drew saw a specialist, and it was determined that there was a shattered bone in his hand which required a cast. Drew also had to have x-rays of his neck, shoulder, and spine done as well as an MRI of his left shoulder and spine following the ER visit. His neck had a compressed vertebrae, and he also had a partially torn quad as a result of the crash. 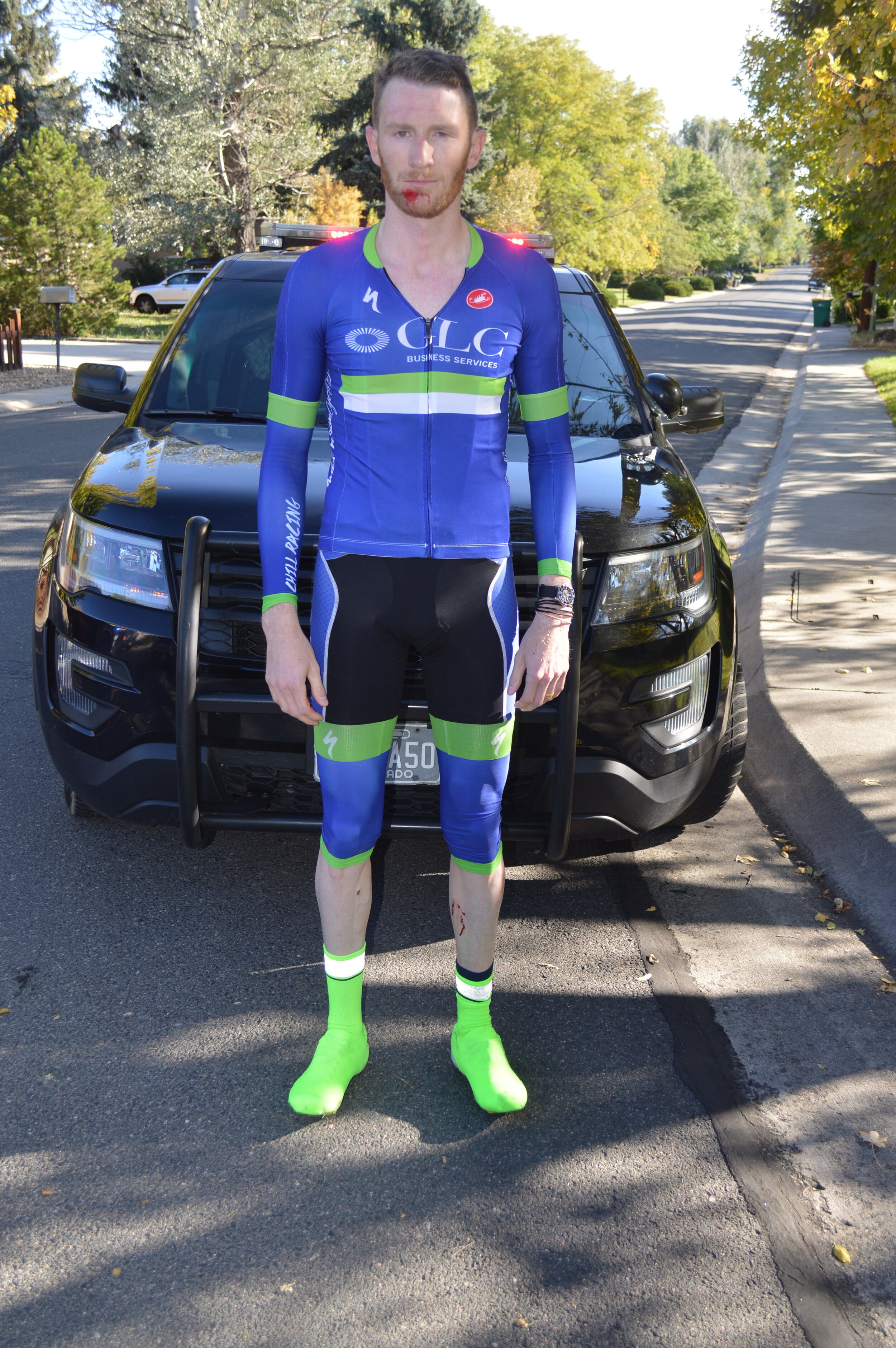 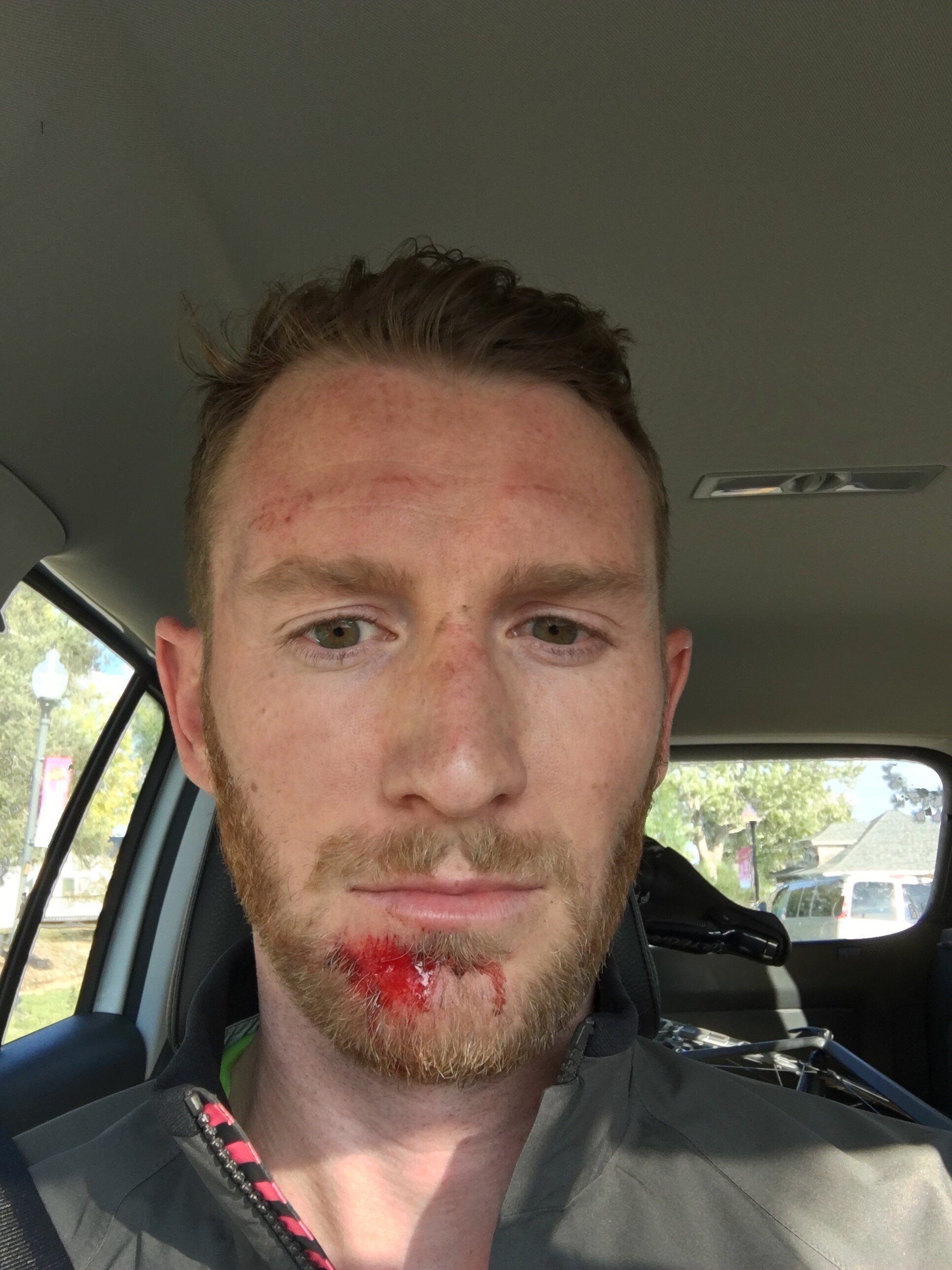 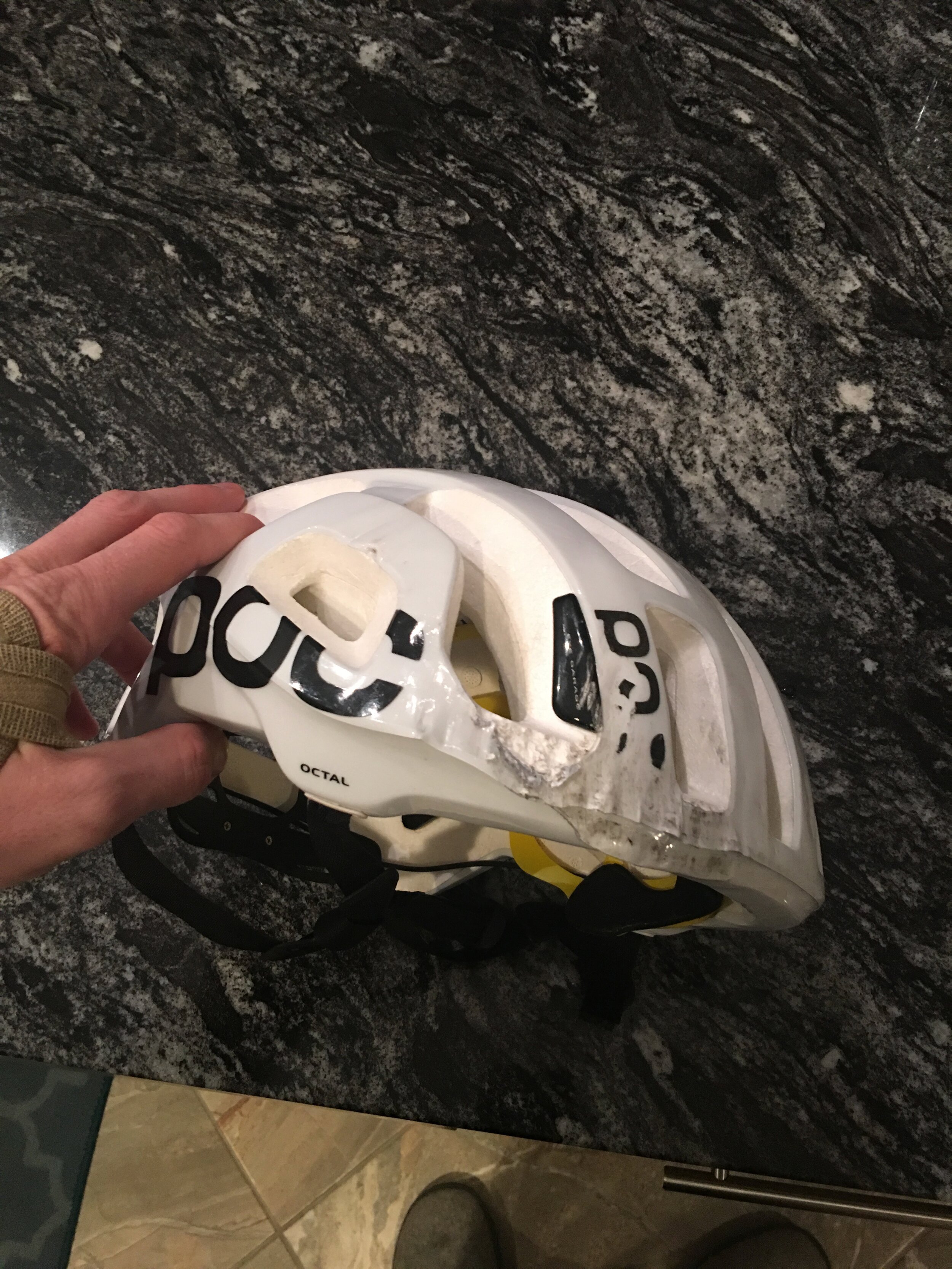 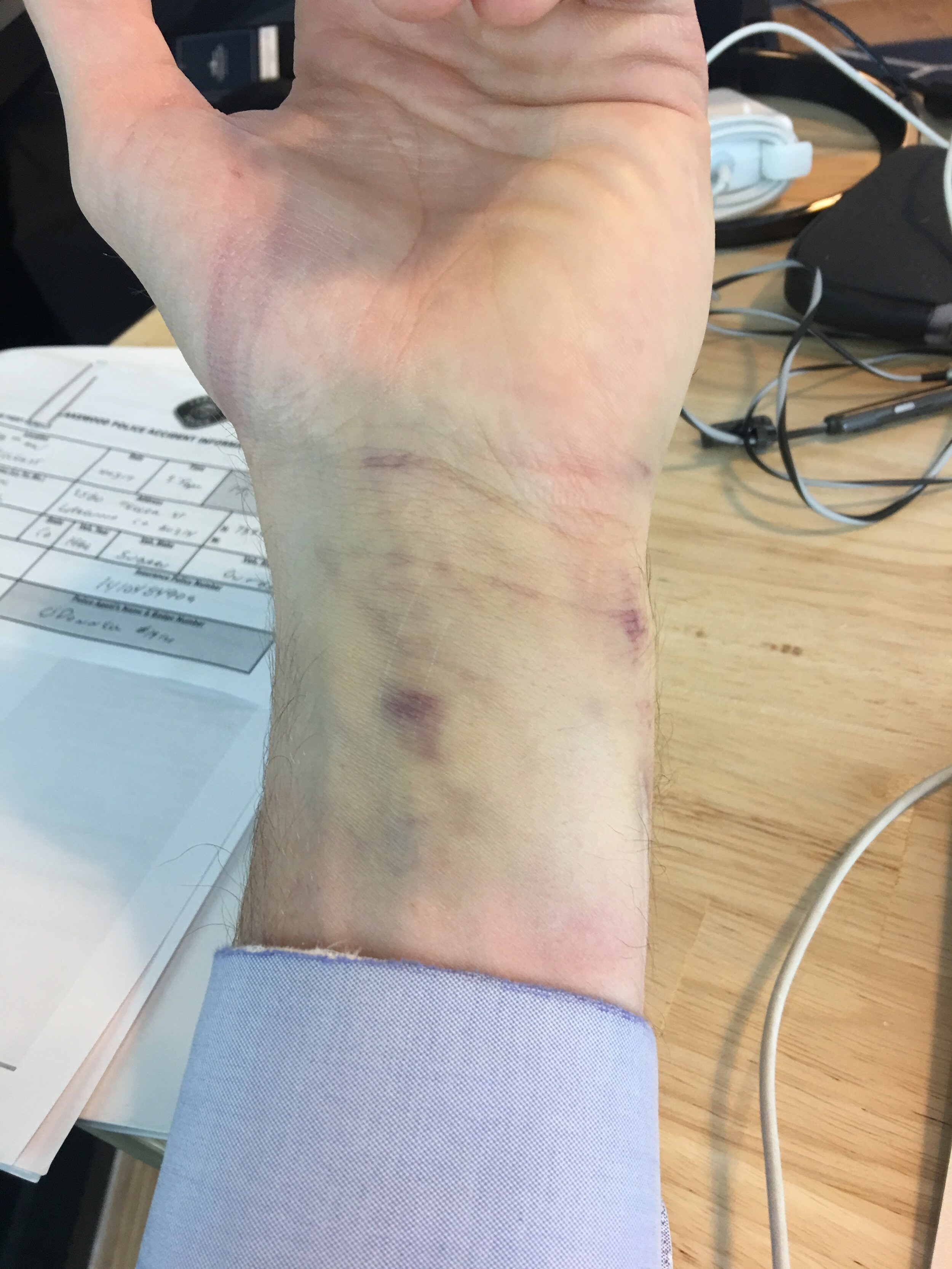 Drew missed work due to medical appointments and a lot of physical therapy. Following the crash, he was not able to ride his bike, which he usually did at least five times a week, and he missed out on leading rides as an ambassador for a local cycling clothing and accessories company. Getting back on the bike was a mental challenge for Drew. He got back on a trainer quickly to prevent his quad injury from resulting in a loss of motion, but the first ride outside roughly five months later was a scary experience.

He wants people to remember that driving is a privilege, not a right. “Waiting an additional minute to pass a rider or make a turn will not end your life, be more respectful. No meeting or event is worth taking the risk of killing someone.” He encourages people to try to put themselves in the cyclist’s shoes, and if you have never cycled on the road, maybe give it a try to understand what it feels like to have cars brushing by and jumping turns. “If we try to understand each other a little better and what it feels like, there could be better respect on the road,” he says.

It does not matter if you are doing everything right, you can still get hit. Drew recommends always wearing a helmet and taking notes if something does happen to you, so you don’t miss anything. Finally, he firmly believes that it is very important to lean on your support network.

One thing that Drew wishes he had known before this happened is to carry more coverage for under and uninsured motorists. He learned that bike vs. vehicle collisions happen more often than you would expect and insurance companies will do everything that they possibly can to not pay out a claim.

What is Drew doing since the collision to make cycling safer for himself and other cyclists?  He works with a cycling group to bring more people into the sport and tries to share his experiences there and discuss best practices with riders.  He has a bell and lights on all his bikes (including his super-light climbing bikes) and talks to people about wearing helmets at all times. “Riding with a camera is a great opportunity, or just lights and bells. I also recommend that they not try to be as far to the right as possible but rather as visible as possible,” he says.

Drew also believes that stiffer punishments including loss of license for drivers that have infractions as well as a no tolerance repeat offender policy could help.

In Colorado, the number of point accumulations according to the Department of Motor Vehicles Handbook for suspension for an adult are:

Some of the reasons your driving privilege may be suspended, revoked, or cancelled include:

The law also empowers judges to assess the driver 12 points which will cause them to lose their license with the DMV. In order for this law to now protect cyclists and hold motorists accountable, we need more DAs and city attorneys to hold fast to the original charges and to stop negotiating careless driving causing SBI cases down to meaningless “defective headlamp” guilty pleas.  We are also asking law enforcement officers to cite careless driving causing SBI.

In the case of this driver, Jefferson County Judge Mark Randall sentenced him to 40 hours of community service, assessed four points to his license, and ordered him to pay a $100 traffic fine. Costs and fines totalled $315.00. Judge Randall suspended a 365-day jail sentence on the condition that the driver complete his community service within 180 days and not be cited for a charge of careless driving or above for one year.

Drew feels that the sentence was fair since the driver did not intend to hit him, and Drew believes he was truly sorry. That said, Drew says it was sad to hear how often incidents like this happen and he is surprised by the lasting impacts of the event.  For example, he will almost never ride past the street where the collision happened. He watches the film of the collision and thinks about it often when he needs to remember how fragile things can be. He still has neck issues every now and then. “It’s amazing to me how little drivers seem to take all of this into account when out on the road. The number of close calls that happen to riders like myself, who cycle daily and are putting in a lot of mileage, are almost daily. We need to cultivate a culture of better respect for riders here,” says Drew.

We come back to our original question. When is enough, enough? How many driving convictions is too many? Eighteen, now 19, including this latest case, driving convictions for this driver. Perhaps, the courts should take this into consideration the next time he is convicted?