No consequences = No Changes.

With its natural landscapes, bike infrastructure, and perfect weather for year-round cycling, Arizona is considered by many as a cycling paradise. Every year, cyclists head to Arizona to cities such as Scottsdale, Phoenix, or Tucson to enjoy miles of cycling routes and open roads. It is also home to many professional cyclists, endurance athletes, and bike commuters. The conditions are honestly, ideal.

Yet, law enforcement and city attorneys are dropping the ball when it comes to protecting cyclists and holding motorists who injure them accountable. Several of our Arizona-based clients saw the at-fault drivers minimally charged and even more minimally punished with paltry five-hour classes. Some even got the charges against them dismissed!  Drivers are simply not punished severely enough for causing injury to cyclists.

In 2017, 32 bicyclist fatalities were reported in Arizona with 1,371 cyclists injured. That made Arizona the 5th most dangerous state for cyclists. According to the People Powered Movement, Tucson ranked second and Phoenix fourth as the most dangerous cities nationwide for cyclists in 2015. People For Bikes gives Scottsdale a low score of 1.7, and gives Phoenix a score of 1.5.

Based on our recent experiences, it seems that traffic violations involving cyclists in Phoenix and Scottsdale rarely make it to court, and the fines/penalties are minimal. Drivers may end up getting off with a $250 fine and no jail time. If a motorist seriously injures or kills a cyclist when violating Arizona's 3-foot passing rule (§28-735), the financial penalty would increase to $500 and $1,000 respectively.

There is no specific statute in Arizona that addresses vehicular manslaughter, and only certain traffic violations may lead to a manslaughter charge if they involve the death of a person while driving. These include driving under the influence, excessive speed, aggressive driving, and racing. (See Arizona Revised Statute (A.R.S.) §13-1103).

Currently, Arizona does not have any laws to protect vulnerable road users (VRU), which in addition to cyclists also include pedestrians, motorcyclists, children, elderly and disabled people.  VRU applies to those groups most at risk in traffic. Additionally, “Arizona is still one of two states that has failed, yet to adopt any prohibition on texting while driving,” according to Arizona-Look Save a Life.

Arizona as a touted cycling mecca, needs to do a LOT more to protect its resident cyclists and the hundreds of cyclists who flock there in the winter for warm riding. Cycling is a profitable subset of tourism for this state, and while bike lanes are very common and prevalent (which is a good start), the state needs stronger, harsher laws and intentional enforcement. It is time for law enforcement, city/district attorneys, and lawmakers to cite drivers properly, enforce harsher penalties, and enact legislation to make cycling safer and protect all VRUs.

Despite serious bodily injuries to our clients, two of the drivers were allowed to take a five-hour defensive driving class, had their tickets dismissed, and received no points or fines. In one case, the driver's ticket was dismissed even before the class was required. None of these drivers even had to appear in court! 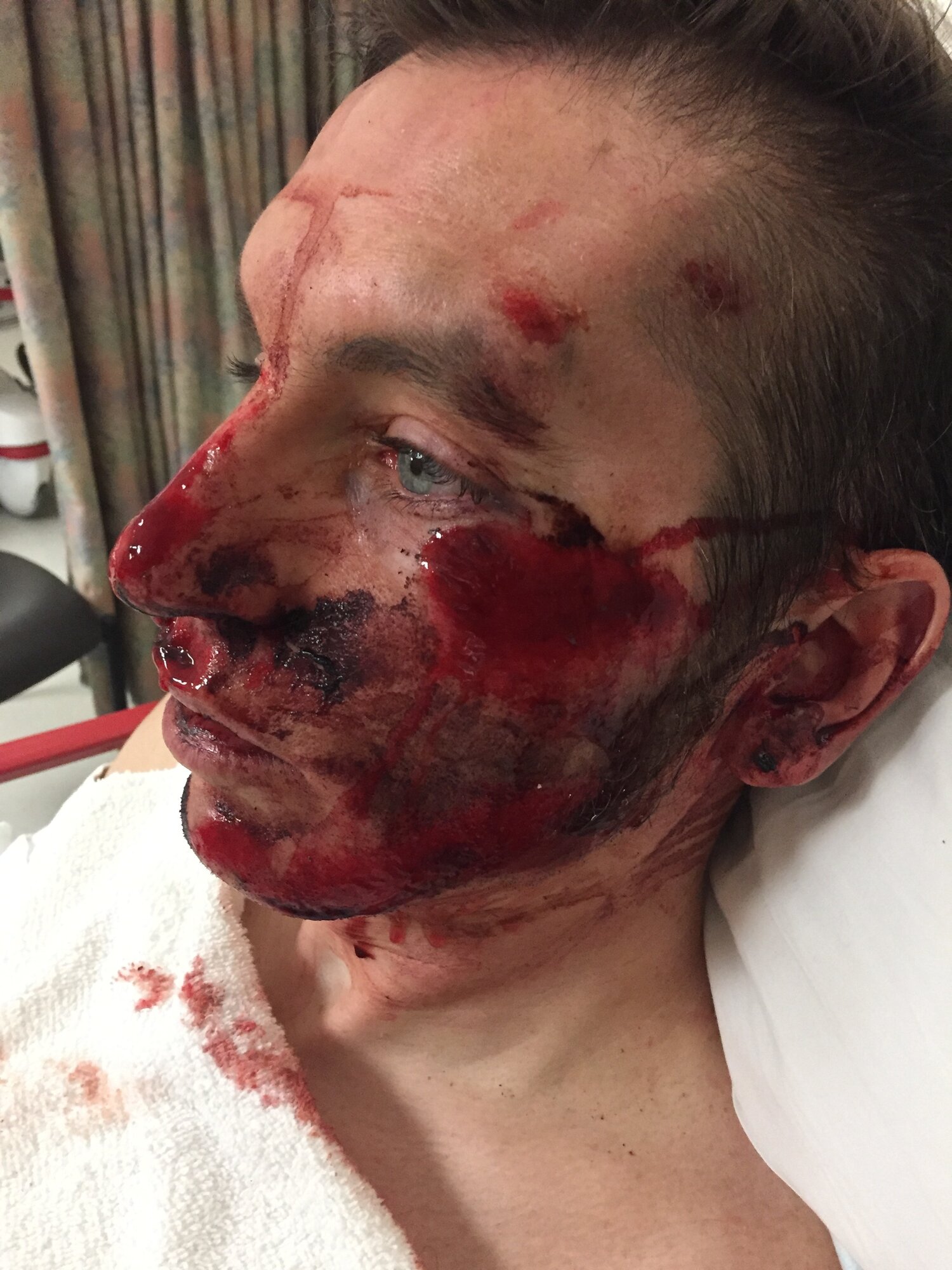 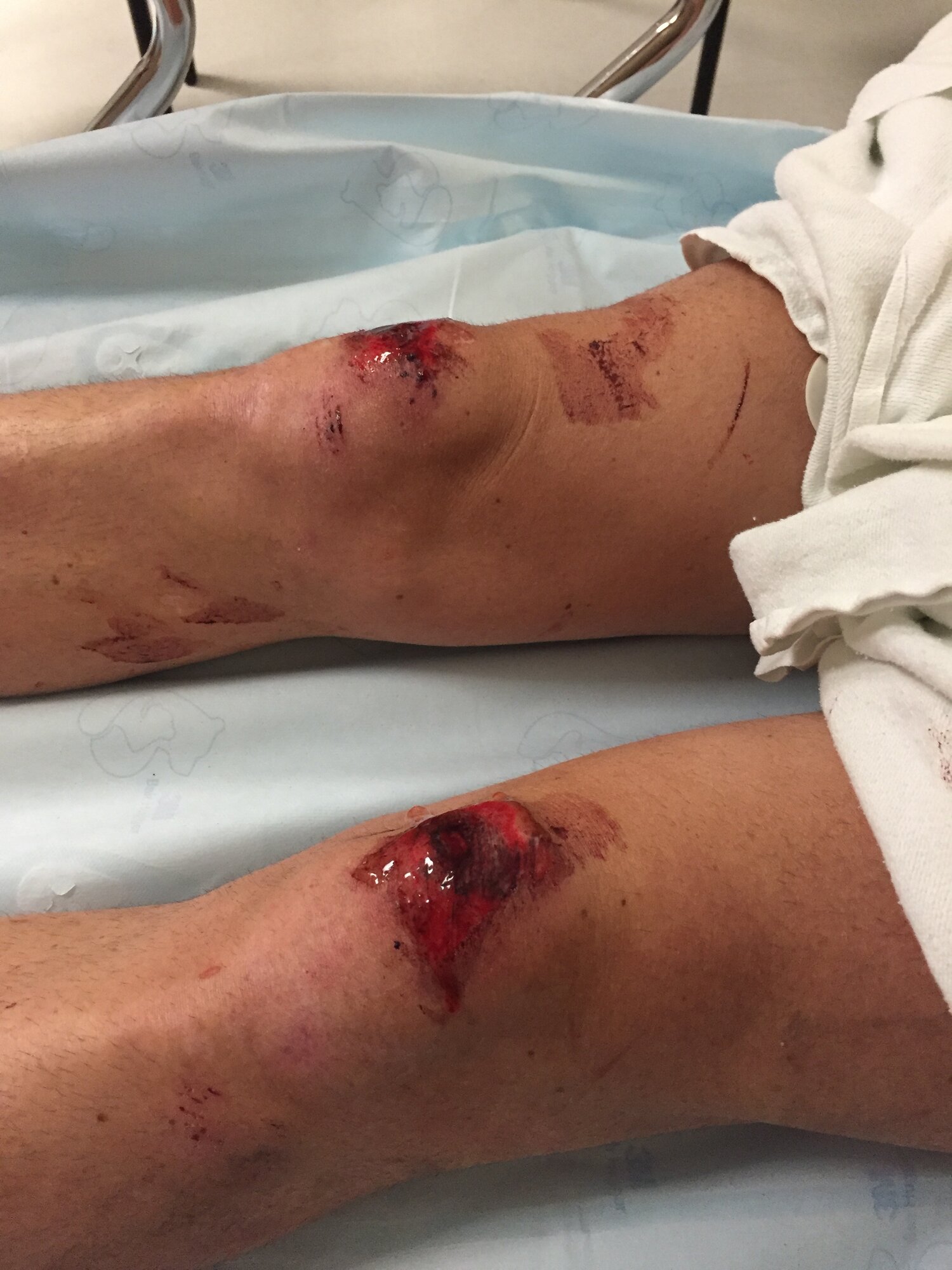 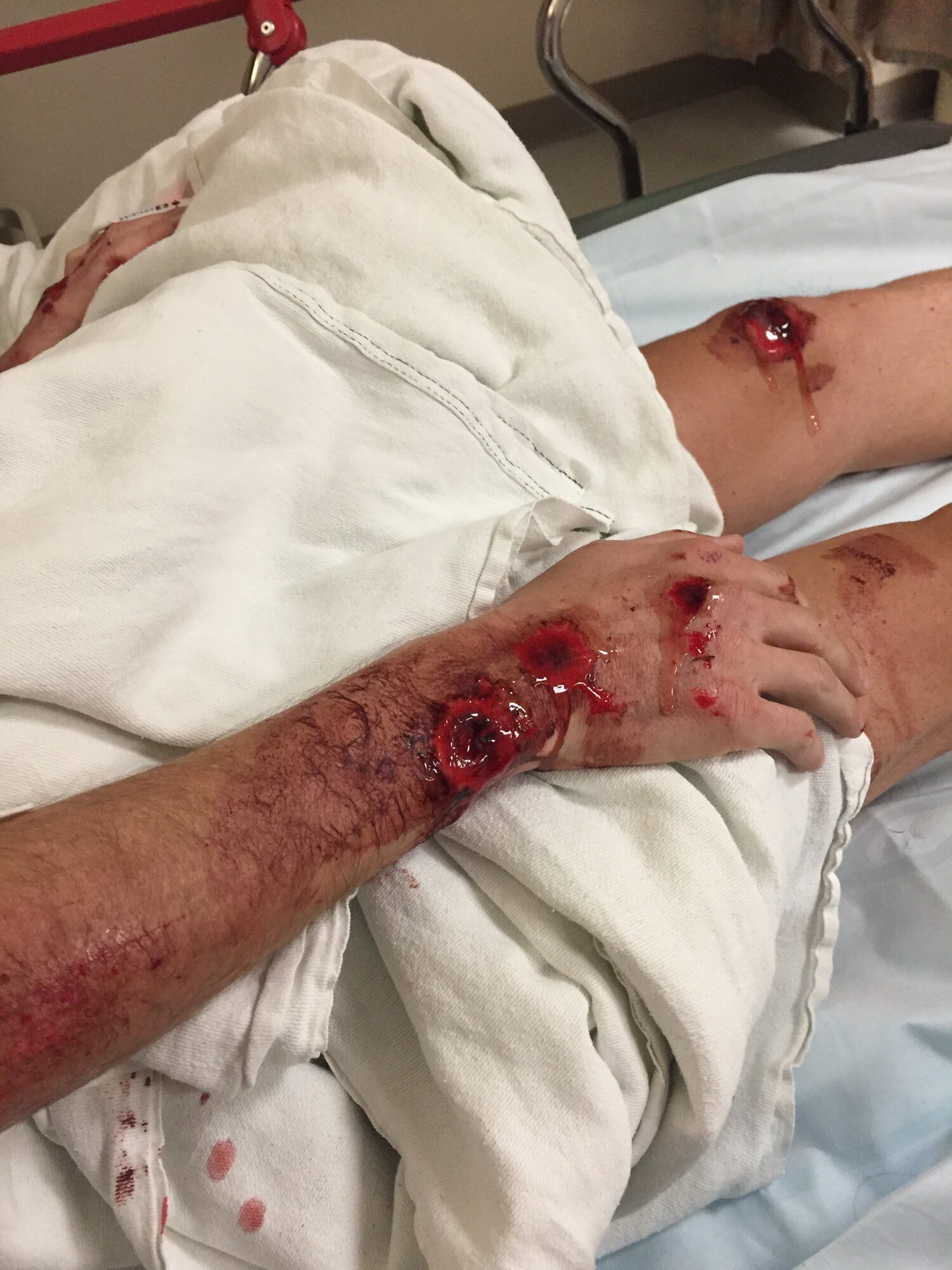 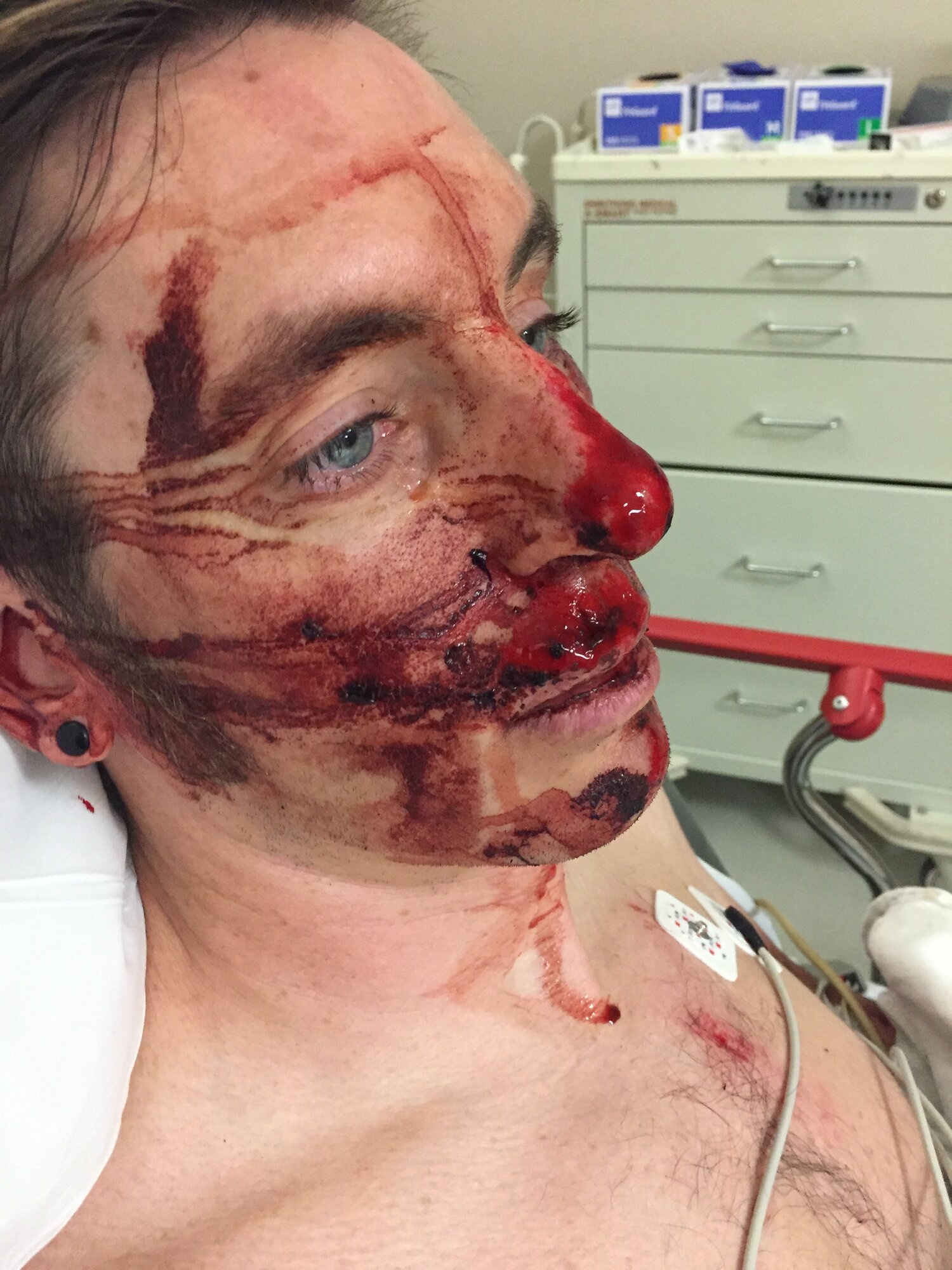 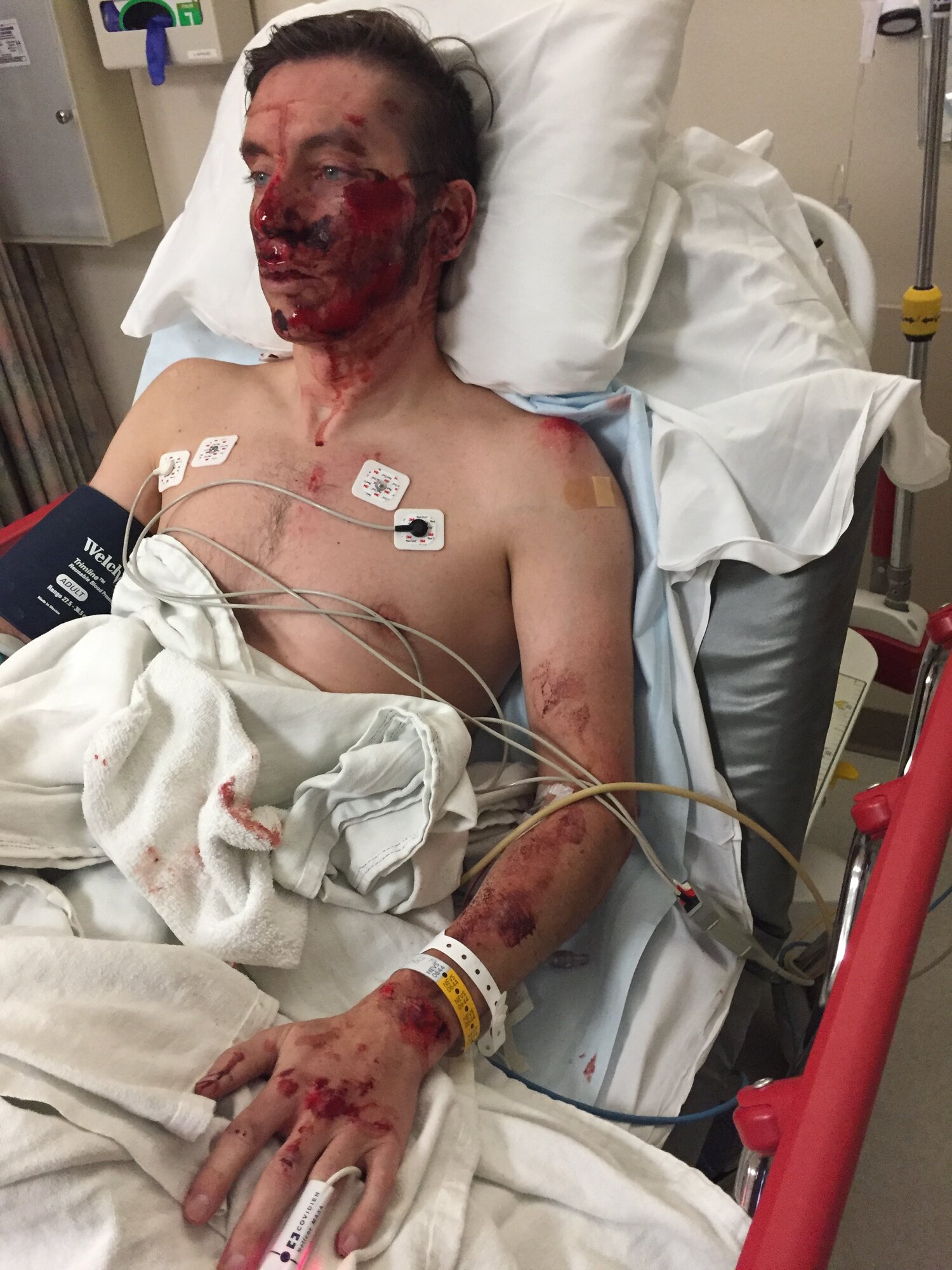 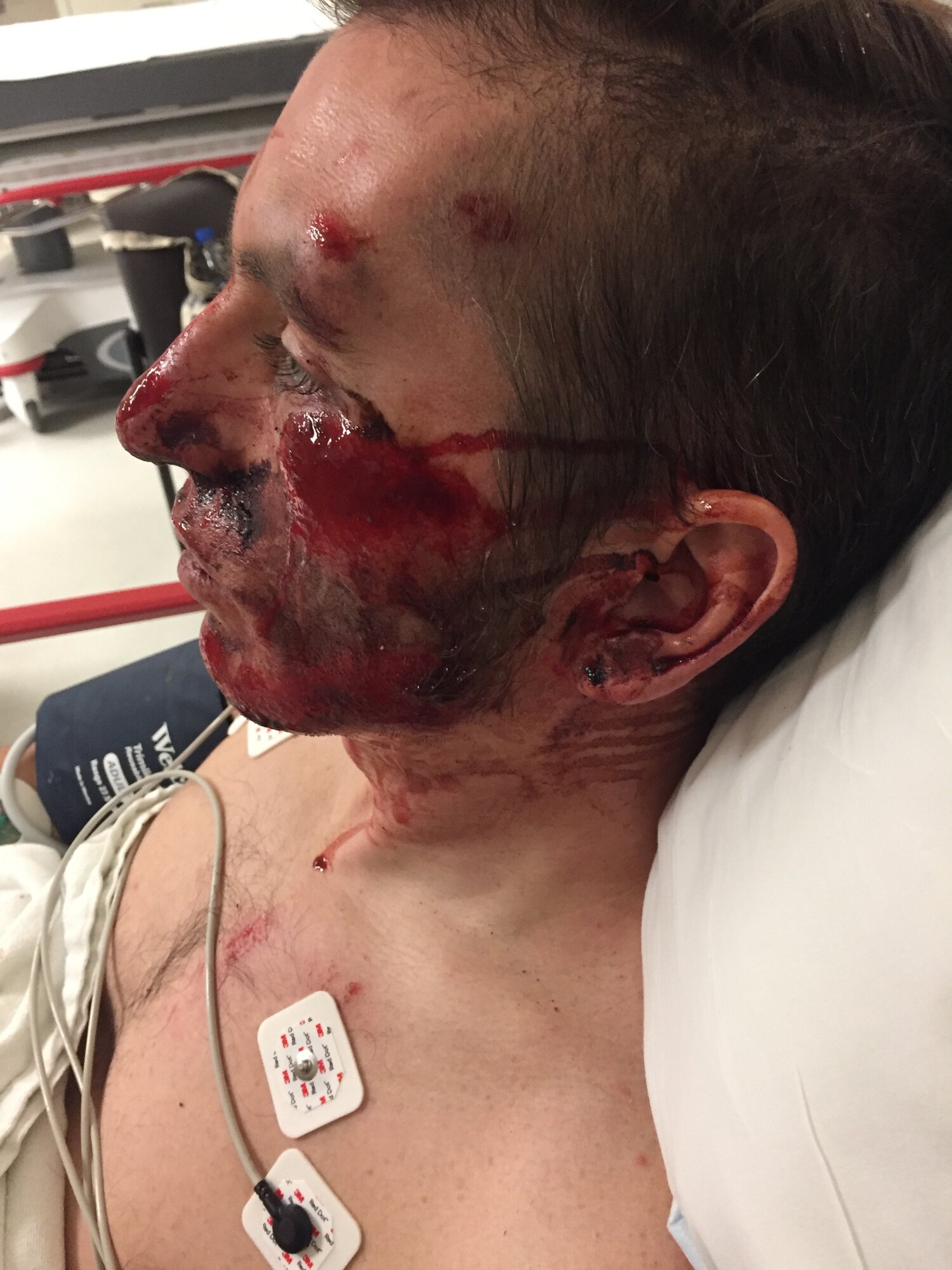 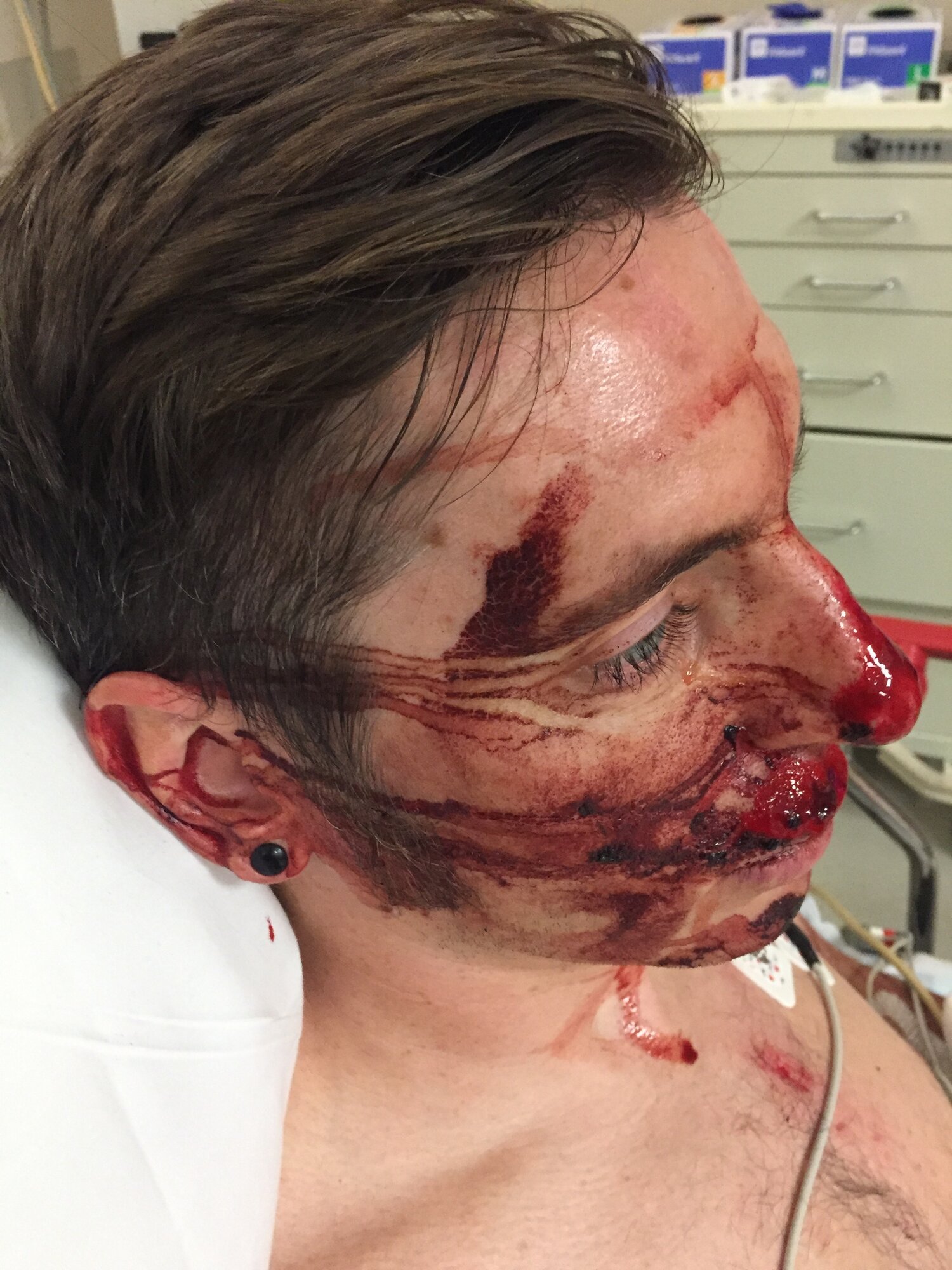 Scottsdale - Our client Ryan Hardy (above) was riding in a marked bike lane around 7:30 pm on February 26, 2019 when he was right-hooked at a T intersection where he had the right of way. He was riding with a bright front light and a flashing rear light and was wearing a helmet and a kit with reflective bands. The driver told police that he “didn’t see the man on the bike” when he turned.

Instead of waiting behind Ryan to safely make it across the intersection, the driver accelerated, passed Ryan, and then made a right-hand turn directly in front of him. The impact of the collision threw Ryan in front of the car into the intersection. He was transported to the hospital for his injuries.

Violation of 28-754 - Unsafe Turning Movement to the Right

A minor traffic violation in which the driver took online traffic school ($200), and all charges were dropped.

How does Ryan feel about the outcome? In no way, shape, or form does he feel that the outcome was just or fair. “It’s pathetic and insulting because about six months later, I still have several problems on a daily basis and still cannot work out in almost any capacity. I still have to see physical therapists, concussion specialists, neurologists, a therapist, and have never taken so many prescription drugs to control problems in my entire life,” he says.

Ryan believes that a law similar to the strictest DUI laws in the country, applied to making any and all contact with a person/cyclist while driving, could change a lot. Like those extreme DUI laws, major monetary consequences, a very high level of culpability, and, maybe most importantly, the highest/strictest level of enforcement of this law and its consequences would help to bring about change.

If he had the chance to talk to the driver about cyclists and safety, Ryan would point out that the majority of outcomes when hitting a person/cyclist with a car is that a human being is killed. He believes that most collisions with cyclists could be avoided by simply slowing down and or waiting a mere 1-30 seconds. “I ask people who think those few seconds are so important, ‘Are you willing to knowingly kill somebody to save that time or just drive faster?’” 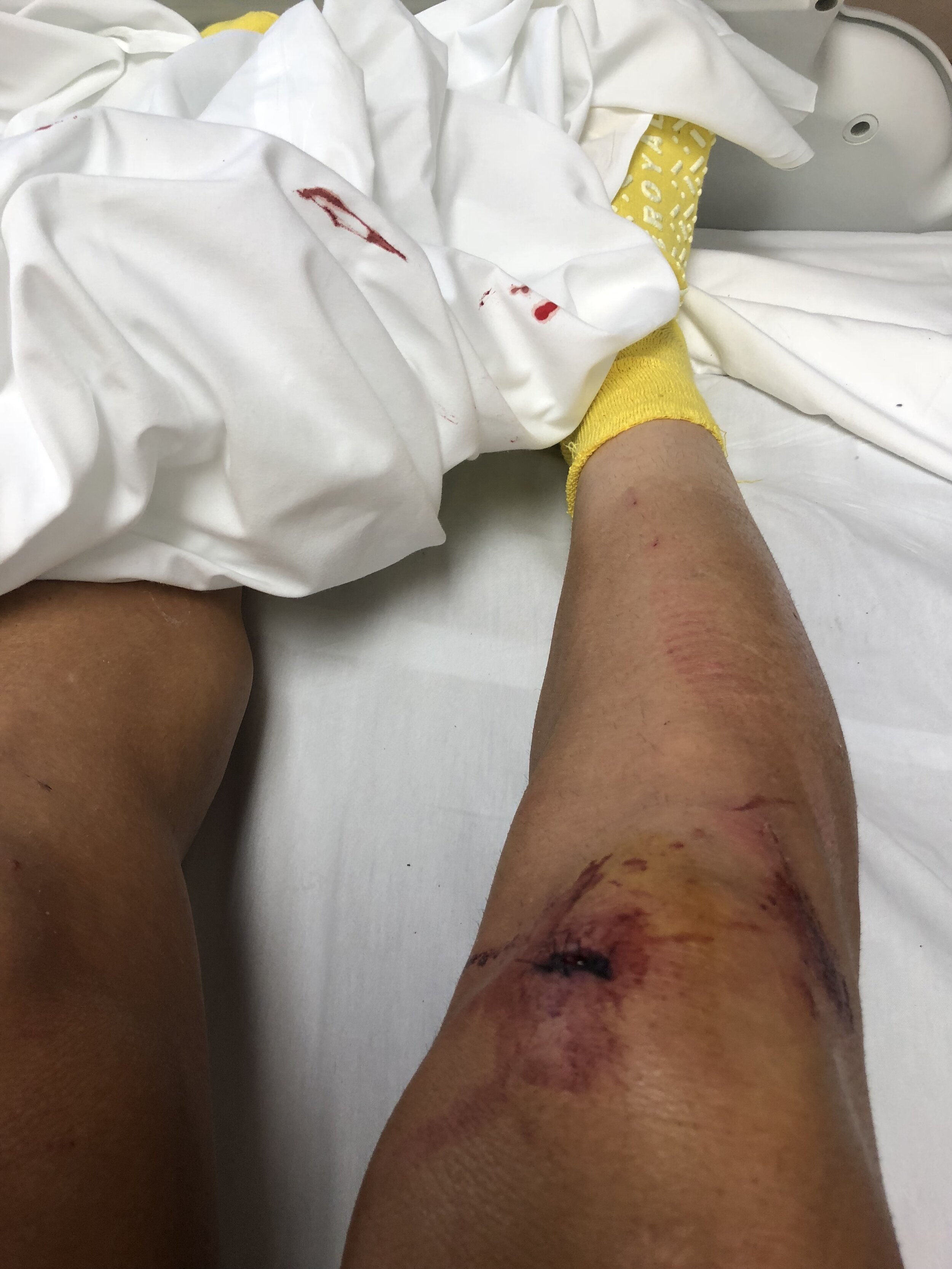 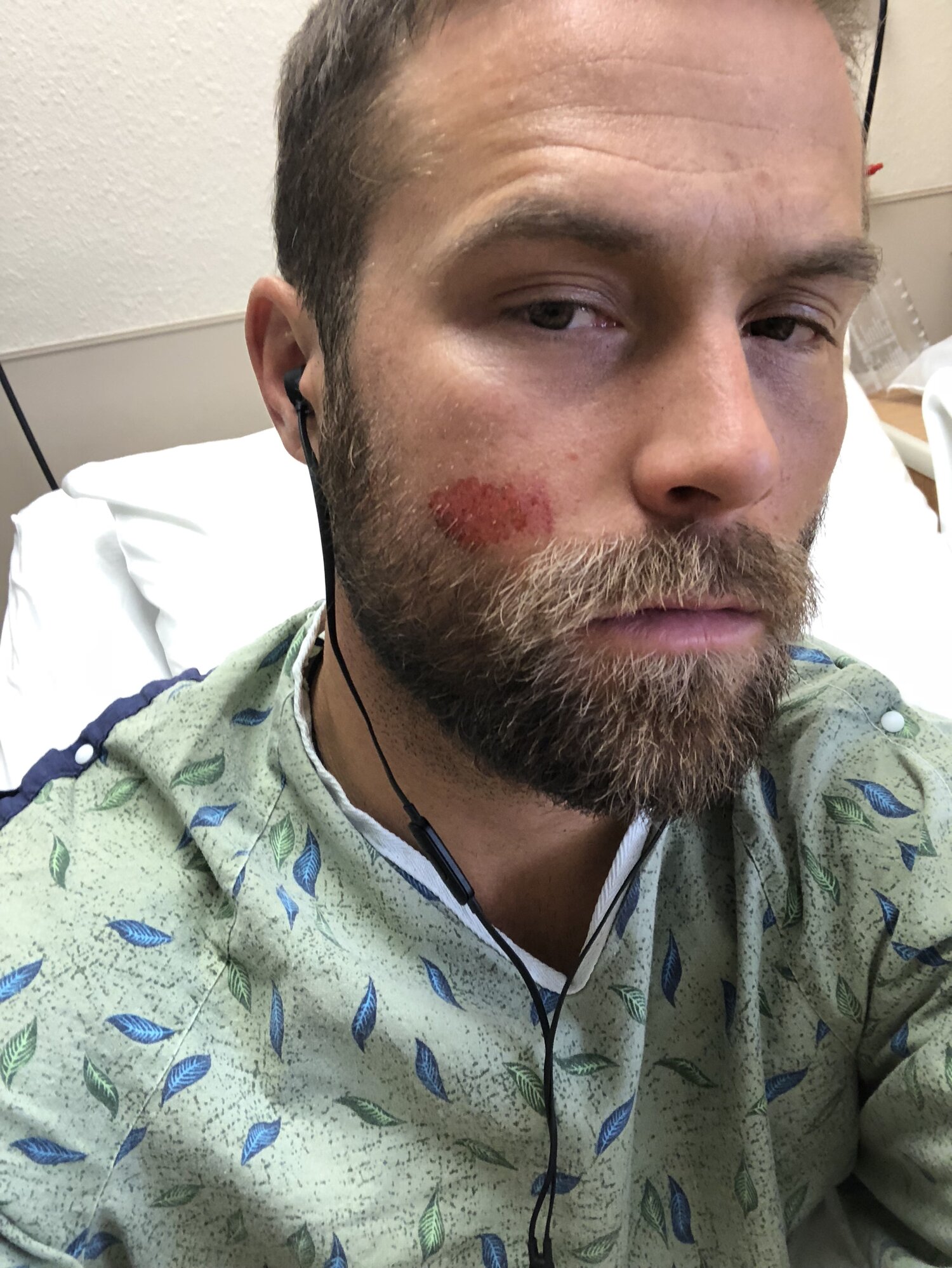 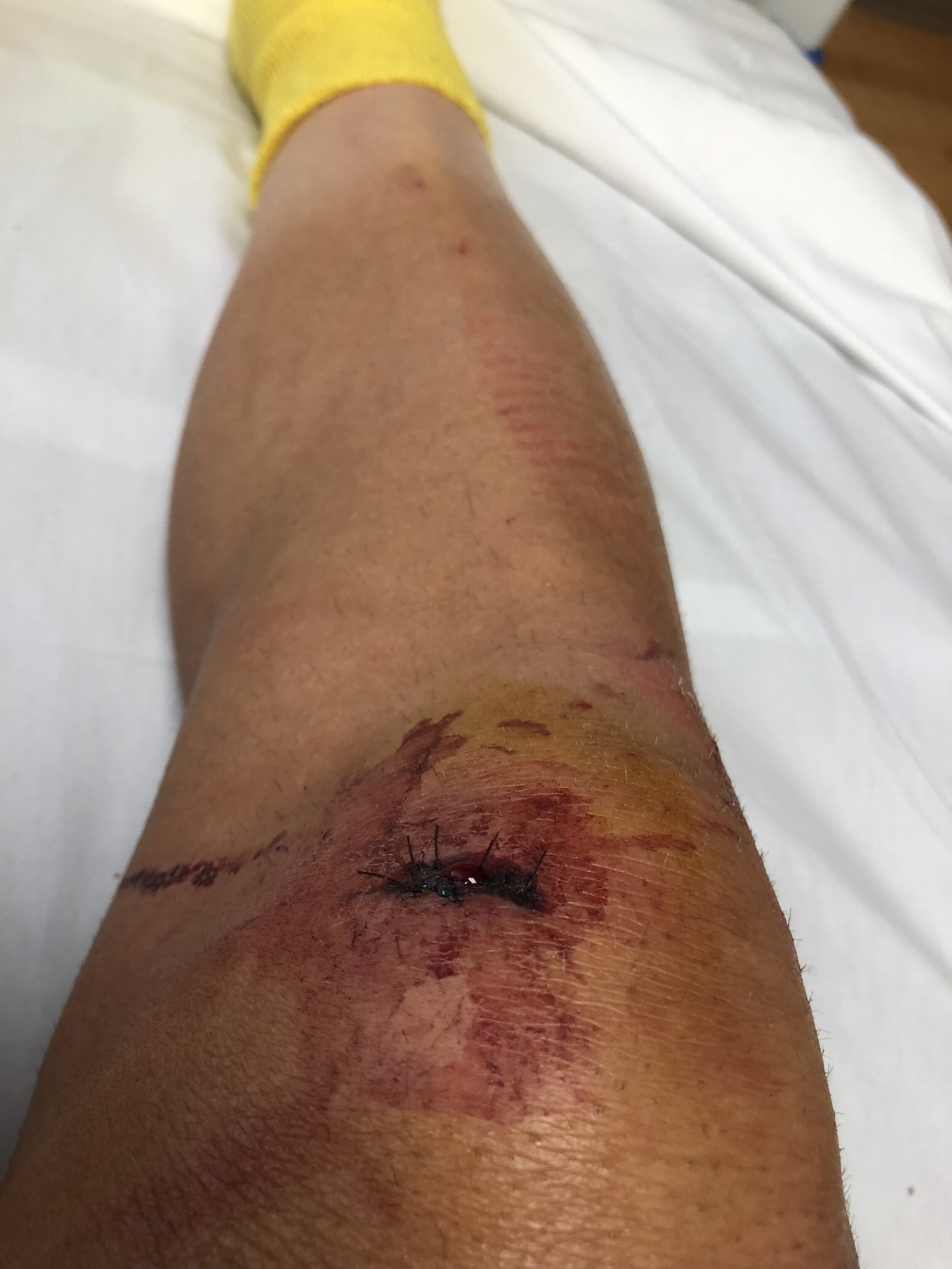 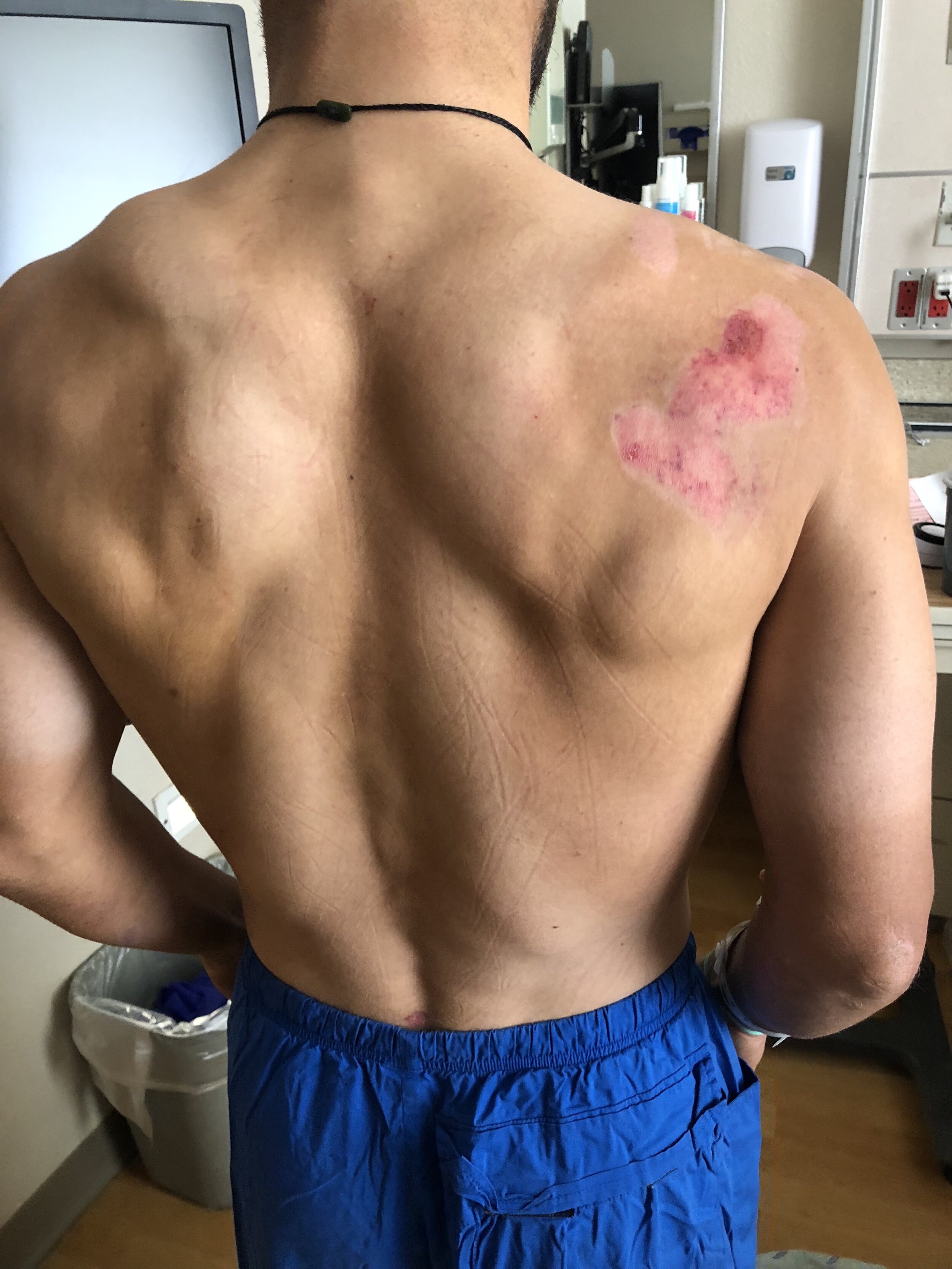 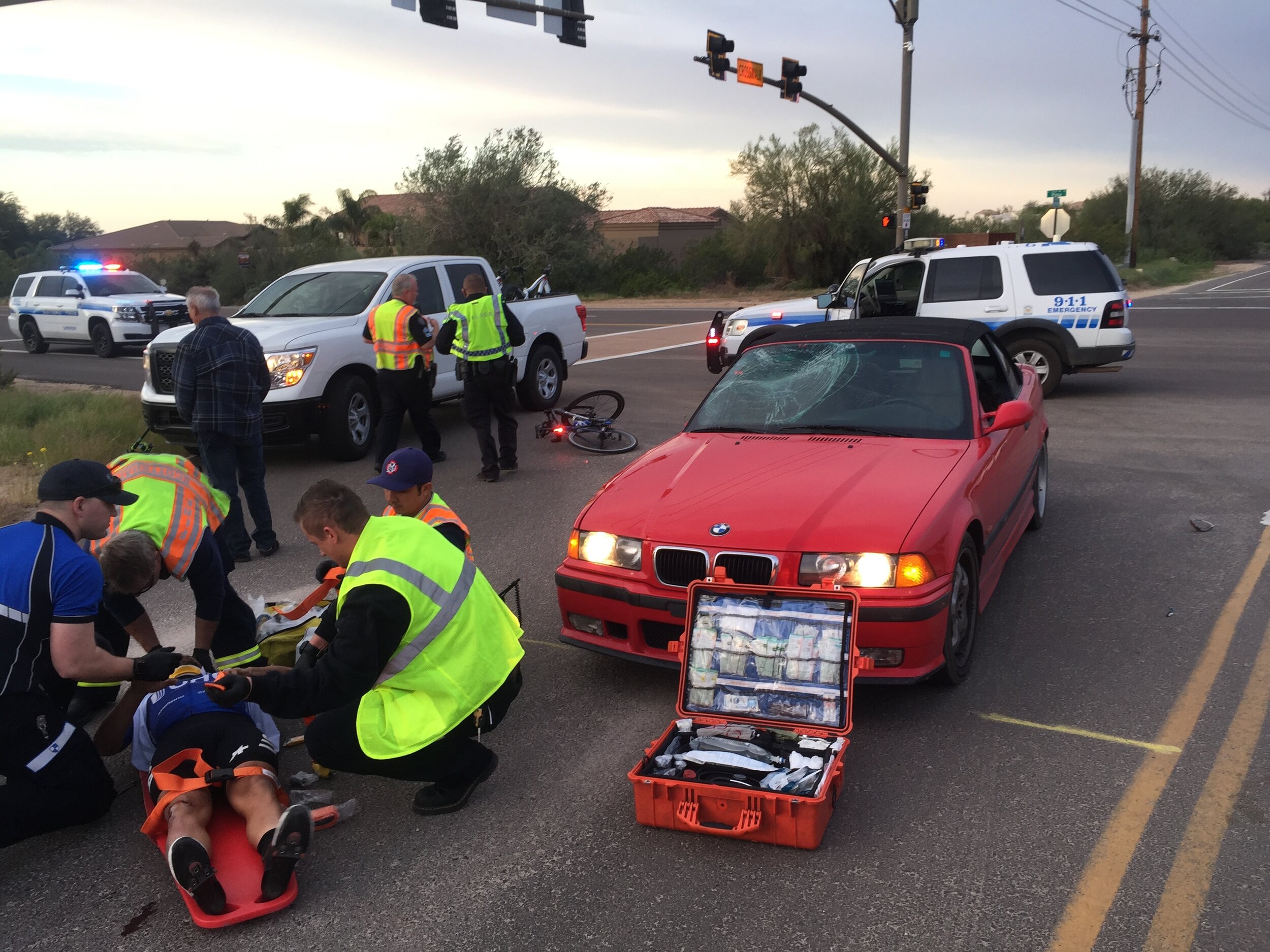 Scottsdale again - Our client Eric Marcotte (above) was knocked unconscious on November 20, 2018, when a driver failed to yield the right of way at an intersection and drove straight into him. He was thrown from his bike and landed on the roadway. Eric was also riding in the bike lane and had the right of way.

Eric is a professional cyclist who rides between 350-500 miles per week. He knows this stretch of road and area very well, having ridden it thousands of times over the last decade of living in Arizona. At the time of the collision, he was wearing his team sponsor’s kit, which is a blue and white combination, and was riding with blinking lights. The driver claimed that Eric “just came out of nowhere.”  Eric maintains that the driver had a visible line of sight looking south well over a mile with the road being straight.

Violation of 28-773, Failure to Yield Right of Way

$250 fine and defensive driving class for the driver, which he and his lawyer argued against for months before accepting.

Eric wants motorists to understand how important it is to be aware and attentive while taking the responsibility of driving a vehicle and believes that the system enables motorists to be negligent. “Drivers will have someone fighting for them to not be responsible. So that enables poor drivers and doesn’t help change actions,” says Eric.

He wishes he knew how important it is that police officers and district attorneys do their job as well. He says they need to step up and set a precedent by setting the consequences for negligent/inattentive/distracted drivers in a way that has consequences great enough to change actions. Suspending licenses, implementing substantial fines, as well as raising insurance rates will make motorists more aware—a $250 fine will not.

Eric recommends riding with a camera because it can keep everyone accountable. “Then you will see how drivers treat cyclists—you can keep compiling those clips and send/share to law enforcement to show them what’s happening—and will also show you, as a cyclist, are following the law.”

Phoenix - Our client Melissa Lemke, was out for a ride on her bike on March 10, 2019, around 11:30 am when she was struck by a driver who failed to yield to her at a four-way stop. She was wearing a white helmet and her cycling kit which was green, white, and black. It had high-visibility striping on the legs and high-vis patches on the front and back of her jersey.

Melissa had stopped at the intersection, yielded to the driver on her right and then proceeded into the intersection once that car had passed through. This is when she was struck by a second vehicle also coming from the right who failed to yield. Melissa’s injuries included a broken elbow and a broken left wrist that required surgery. A large plate was put in her left wrist, and she had to wear a splint for her broken elbow. At first,  Melissa was dependent on her husband for almost everything: getting dressed, bathing, personal hygiene, preparing food, etc. Even now, nearly six months later, her left wrist often aches and many actions of daily living incite burning and pain in her right wrist. Melissa ordered a new bicycle but had thoughts about returning it and not riding again.

Violation of 28-773, Failure to Yield Right of Way

Driver's ticket was dismissed by going to traffic school.

That’s right! The ticket was dismissed because of the type of ticket he was given: Failure to Yield Right of Way.  The driver now has a clean driving record while Melissa continues to deal with the physical impact of the crash. Even though the police officer came to the hospital and eventually learned that Melissa needed surgery, the driver was given a ticket that could be dismissed by attending traffic school, not a ticket that indicated he had caused serious bodily injury to Melissa from which she has not yet completely recovered.

When she first learned of the ticket dismissal, about a month after the crash, Melissa was truly devastated.  Up to that point, she had taken a small comfort in knowing that the driver incurred a serious consequence for his actions. Finding out that the driver was able to wipe his driving record clean, while she was still seeing a surgeon and a physical therapist for her injuries, was shocking.

“This dismissal speaks to the lack of protection we cyclists have on the road. If drivers are not penalized in a meaningful way for running down a cyclist, we are simply moving targets out there. I really don’t know when or if I will fully recover, and the driver does not even have a black mark against his driving record,” says Melissa.

She wishes cyclists knew how they may have to start fighting for their rights at the scene of the crash and that they need to know the laws so they can ask the right questions. She also wishes that she had been able to take photos and had thought to record the driver saying over and over that he did not see her. “I wish I would have questioned the officer about the type of ticket, but I did not know he had choices to make.  I thought he was at the hospital verifying my injuries so he would have evidence to support a serious charge against the driver,” says Melissa.

She thought she could depend on the police. Although she was conscious after her crash, many cyclists are not or are so injured that they cannot not possibly stand up for themselves at the scene.  “We should be able to depend on law enforcement to protect both drivers and cyclists,” she says.

So, what can you do to bring about change? Here are some suggestions:

For more information about cycling laws in Arizona and municipal codes for Phoenix, Scottsdale, and Tucson, visit our website. Would you like to get involved in Arizona bike advocacy, specifically? Then please consider joining local groups working hard to make positive changes, like the Rob Dollar Foundation, and Look Save a Life Arizona.